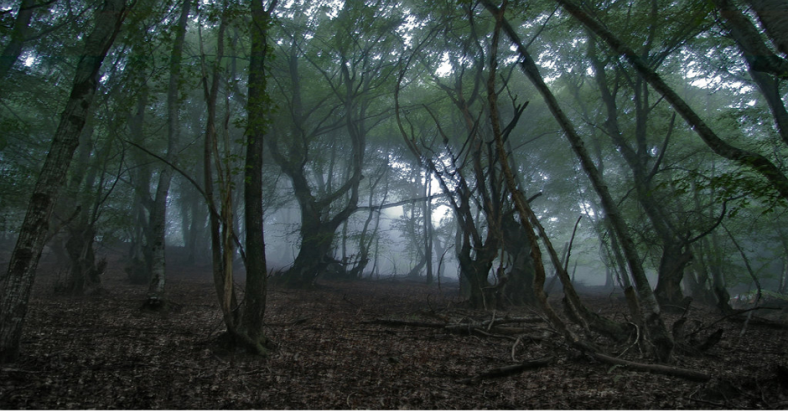 This Weeks Prompt is :5. Narrator walks along unfamiliar country road,—comes to strange region of the unreal.

The prompt speaks to a mythological motif, the odd country. Its one we have lost in this modern mapped world. In the ancient times, there was the Otherworld of the Celts, a fairyland that one could stumble into at any time. Fairyland was, however, a place of many less than fortunate things. As Emerich Rich and Mr. Pratchett can tell you, fairies are not as you now know them.

The enchanted woods in medieval times, where the Graal and other monsters and mystic castles lie, was an echo of this old motif. The woods holds potency and power, and surround (if not engulfs) orderly lands. Dwarfs, dragons, giants, and demons walk side by side with the fey in the woods. The Green Knight, a towering figure in the story of Gawain, looms with his headsman’s axe to play his foul game. The marshes of Cambridge are likewise inhabited, with strange lantern men and demon dogs that wait for their prey. The wild, chaotic, and mad realms were always just down the road or across the sea.

Our story then, will be tapping into an old strain. Another strain we may discover is that narrative of describing a faraway place. This runs the risk of the Utopia, of being conflict free and plot-less. Still, we have other options. Strange dealings can occur, as well as bizarre wagers. Dealings that go awry, with powers beneath the earth. Or we have the classic danger of being trapped in this wondrous place, or worse, leaving and being locked out.

Being locked out of fairyland often results in discovering that time has flown past. Decades or centuries might slip by, with the protagonist none the wiser. And when the unfortunate man (and in the old stories, sadly, it is always a man) sets foot on mortal soil, he ages at once. And, typically, expires.

How to do this in the modern age, with GPS and MapQuest and cellphones and other life lines to civilization, will be difficult. We could of course set it in any earlier era, even just four decades ago. But that, frankly, seems to ruin the fun. A source, for possible horror in the modern information filled age, might be the phenomenon of creepypasta. Set in today’s era (typically) in rather urban environments at times, creepypasta’s might be handy for how to turn the web of knowledge into a knot in the throat of the reader.

Mr. Lovecraft, for his part, did not paint alien vistas that were pleasant, as is readily apparent by Ry’leh and Yuggoth. His own version of this tale The Shadow Out of Time does similar, sending Mr. Randolph Carter to a number of strange and foreign lands and time. Yet…yet perhaps we might. Our wayward traveler might seek stranger countries than they suspect.

One thought on “The Wild Wood”