This Week’s Prompt:25. Man visits museum of antiquities—asks that it accept a bas-relief he has just made—old and learned curator laughs and says he cannot accept anything so modern. Man says that ‘dreams are older than brooding Egypt or the contemplative Sphinx or garden-girdled Babylonia’ and that he had fashioned the sculpture in his dreams. Curator bids him shew his product, and when he does so curator shews horror. Asks who the man may be. He tells modern name. “No—before that” says curator. Man does not remember except in dreams. Then curator offers high price, but man fears he means to destroy sculpture. Asks fabulous price—curator will consult directors. Add good development and describe nature of bas-relief.

In our final word on this prompt, brothers and sisters, I wish to discuss the grandson of Yog Sothoth’s modern incarnations. And how…eschew they sometimes are. For the lord dreaming in Ryleh tends to be combined with two other figures of mortal antagonism: The Devil and entities like Godzilla.

The first being more rampant, we’ll approach it first. There is a trend, perhaps well intended, to make Cthulhu a grand source of evil in the cosmos. Many a demon lord in gaming has his visage, and his rare forays into film bleed over into Satanism more than the strange, global, and aboriginal nature his cult has in the original work.

This is strange, given the difference between the two characters. We said our piece on the devil here. And if there is something dependable dealing with the diabolic it is a desire to destroy mankind. Either a moral corruption through temptation, or a physical filth through literal death and devastation. The lords of locusts in Revelation and the great dragons of medieval times care deeply about humanity. They want it dead and ruined, and hate it like only someone who is dear to the subject can hate.

And that level of personal sadism is uncommon if not absent from Mr. Lovecraft’s work. The great Nyrlanhotep, the Crawling Chaos and Man in the Woods, is the closest to a devil figure. He is often the patron of witches and nightmares, and in some tales it is he who brought us the atomic bomb. And when Azazoth decides it is time to undo all creation, it will be he who heralds the end of the universe.

But Cthulhu certainly is not such a subversive entity. Firstly, his direct influence on the world is rather limited (a few days span, when he rises from the deep), and secondly, he is more a destroyer by accident than intent. Cthulhu rising is a terror, but it is a terror because his mere prescence is toxic. And while his draconic features imply impish and hellish mind, he appears to lack it past the rousing of his children and perhaps his extended kin of Great Old Ones.

It would be easy to blame Derleth. Derleth attributed to Cthulhu an evil disposition, and arrayed against him gods that might be called angelic (although later writers made them just as horrible, if perhaps less abrasive). But we cannot blame him alone. There is, as they say, at least one other. Simon.

Simon’s real name is unknown, but what is known is that he penned a work claiming to be the legendary Necronomicon. Within, he writes a mythology that attempts to weave Babylonian narratives together with ones of the mythos. As well as promote an idea of magic and occultism that will trump all other such organizations.

The book links clear Satanic imagery with Tiamat, Azazoth, and Cthulhu, placing them as the greatest of evils in the cosmos and the masters of innumerable demons. To those who know the mythos, this is head-scratching on a number of levels, with several orders of being represented as the same. Further, the presentation of the Mad Daemon Sultan as an ally or lieutenant of Tiamat seems more bizarre. Perhaps Simon was some foolish cultist who misunderstood the Mad Arab.

But the book became famous, as books of sin and darkness that assert they grant mastery of the universe are want to do. I will spare my readers the questions of its authenticity, given that Mr. Lovecraft himself never asserted the Necronomicon was real, and instead present a second notion for this conflation of the Devil and Cthulhu: Modernity.

The devil, with his horns and brass tridents has become, perhaps, to familiar. The dragon has likewise suffered, no longer an alien beast of horror and terror, but a creature that is familiar in its own faerie way. The Mythos, and the squid headed Cthulhu in particular, are similar enough to step in as devils, yet bear an air of strangeness often lacking in modern demons (granted, this is enhanced by leaving the strangeness out of devils and angels. But I digress). 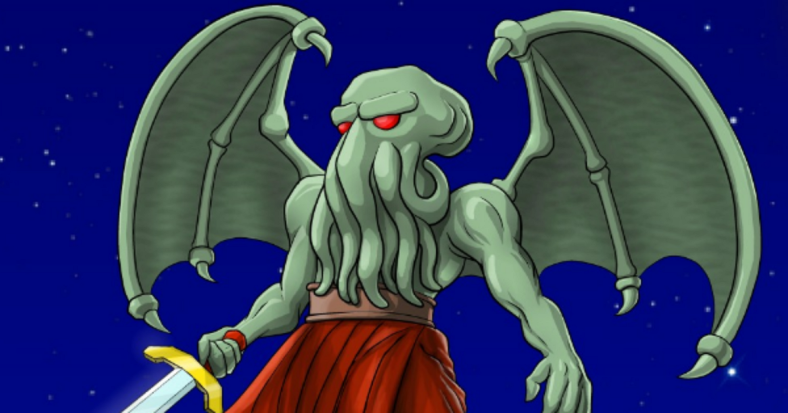 The comparisons to Godzilla and similar large monsters rest almost on the other end. Many seem to believe that what renders Cthulhu terrifying is his sheer girth. His mass and his ability perhaps to regenerate are what makes him a threat to human kind. This is likewise mistaken.

Firstly, in the Mythos, the threat of Cthulhu clearly transcends the physical. He sends forth dreams and visions across the glob, and if some sources are to be believed, he is quiet a knowledgeable beast. He has flown from distant stars after all, and command wars. We know he lays dreaming, and the Dreamlands of Lovecraft are no small matter. Lastly, some texts call him high priest of his own kin, a child of that dread creature Yog Sothoth. Such a pedigree and position implies a more calculating and expansive threat then mere mass.

Secondly, Godzilla in particular is peculiar. In most renditions of giant monsters, there is a tone of punishment. These are holy avengers let loose, either for the dead or the environment or the mistreated scientist and so on. They have come because man has grown proud, to remind us of our smallness and teach us to respect something or another.

And while Cthulhu shows our smallness in the vast cosmos…he does only that. There is no primeval wrong he is undoing, and the advent of technology has little to do with his ascent. There is no morality to the Great Old One that we know of (except, of course, the disagreement over whether he will liberate or destroy the world, but that is a matter of mortal debate). If there is some cosmic significance to his conflict, it has little to do with our fate in particular. The threat of Cthulhu is amoral – it seeks neither destruction or aid to mankind. Merely to pursue its own agenda regardless of the effects on the world.

I will here make mention of a few other modern treatments of Cthulhu that my fellow brothers might find interesting, if unusual. Mr. Neil Gaiman wrote an autobiography of Cthulhu, as well as a British mystery story. There is of course the now famous video game Cthulhu Saves the World. And lastly, the wonderful people at Extra Credits have compiled a video honestly could have replaced this.

3 thoughts on “Ia Ia: What A Novel Phrase”