The Resulting Story: What Was It?

The nature of the invisible, the unseen and perhaps only barely felt, is so vast that we might have some difficulty. Demons, angels, ghosts, gods, jinn, giants, the entire genre of tales concerning little people are all examples of invisible things that may follow someone home. To ease our ability to work in this context, it would serve us well to examine a piece of fiction that Mr. Lovecraft had in mind when he wrote this prompt, one that he is known to have held in high esteem. I mean the French story, the Horla.

The Horla is an alien creature, or rather an “Outsider”. The novel does not detail it’s origins, but does give a good amount of description of it’s abilities. The Horla is a sort of vampire. It is an invisible presence that haunts the protagonist and alienates him from others around him. The Horla itself feeds on the life energy of the main character as he sleeps, and drinks water while remaining utterly invisible. The Horla’s arrival is eventually traced to a ship from Brazil that the main character happened to wave at as he passed it. This sort of little gesture with vast consequences is common in stories of invisible forces haunting ones life. The Horla renders the man’s life so intolerable that he schemes either to kill the horla itself, himself, or both if that is what it takes. 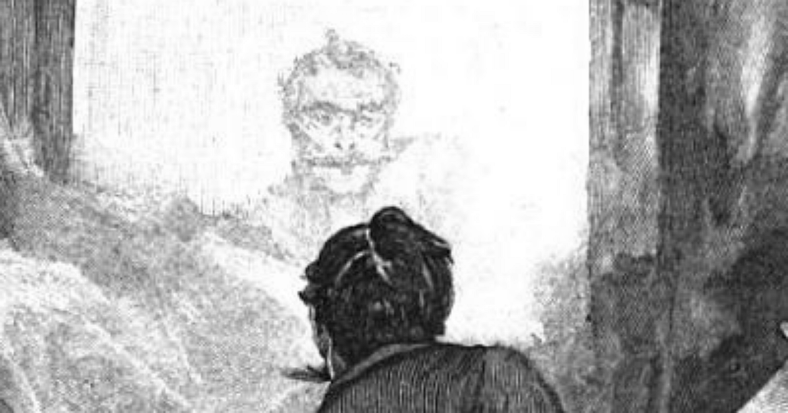 From the Wikipedia Article on the Horla.

We’ve talked about the sort of insomnia the Horla generated before. But a better description, particularly when pared with a vampire, might be those creatures that are considered responsible for sleep paralysis. Jinn fall into this category, as do a variation of the witch who manifests as a cat in Italy. In old English, the term for this state is being “hagridden”, as one was…well, ridden by a hag while they sleep, leaving them paralyzed and drained in the morning. Hags of this sort can be found around the world, although a nice summary of them is here.

Other traditions from the Germans and Swedes assign this role to a goblin, the Mare, that sits atop someone’s chest as shown below. The Mare would ride non-human things as well, including even trees. In the early thirteenth century, there are accounts of a king losing his life to a sorceress’ mare that drove nightmares upon him.

Another variation in the northern European climes is the Alp. The Alp has the distinction of drawing it’s power from a magical hat it wears at all times. The Alp will drink the blood of sleeping children and men, while drinking the breast milk of women it’s preferred victims. The Alp in many ways resembles a demon, being able to shape-shift and driven off by the cross. The alp has one more connection that is of an interest: the term Alp is etymological cousins with the term “elf”.

It is often hard to remember that elves, as we know them, are a frankly rather strange conflation. The tall, beautiful, haughty race that we find in Oberon and Titania and the Lord of the Rings are drawn from the nobles of a lineage, while expunging the parts of elves and little people who spoiled milk, that waylaid travelers, dance with them until they died, or even stole children. Even Shakespeare maintains some of the awfulness and pettiness of elves, with Puck and Oberon enchanting a man to have an asses head and conspiring to have Titania fall in love with him.  The danger of elf shot, a chronic pain in the limbs, was quite real. The line between elf and vampire, now rather clearly drawn in modern fiction, was less clear.

A variation of Nightmare, above. It is weirdly hard to find pictures of these guys.

A non-European example of such little people, one that is more pertinent to our invisible condition, is the Pukwudgie. The Pukwudgie is capable not only of invisibility, but also of sowing confusion, creating fire, becoming dangerous animals, inflicting injuries with a gaze, and damaging the memory of their victims. While their temperament seems variable depending on locale, the capacity to wreck such havoc on the life of a human being is considerable. Why, at this rate, all they need is the want to steal life energy, and their almost a horla!

The Netsilik people have two invisible people around them. The Taglerqet are shadows that resemble human beings in appearance and society. They are visible only when they are slain. The more standard ivigut are humans who, when seen, turn into stone to hide their appearance from others. They are rumored further to feed on the stones themselves.

With that in mind, do we have a direction for our narration? Do we have a place for our story to be going? The conflict no doubt should be the sudden attraction of this invisible thing, this nameless force that follows our protagonist and does…something. While the obvious answer is to make it a hostile power, akin to the forces that follow in a number of tales from disturbing tombs of elder civilizations, the means of harm should be more precise than that. The sickening of milk, the rotting of wood, the chronic pains, the fevers, and the headaches. An invisible force that drives someone to madness and ruin over a slight, perhaps unknown or unintended, is a good basis for horror.

To dive a bit into the nature of the fear of the invisible, it does partly relate to a fear of the unknown or a fear of the unseen forces that shape the world. There are economic owners, there are cultural institutions, there are unseen forces of society and humanity that do in fact operate in the world and can drive someone to ruin without any notice. These abysses aren’t completely mysterious, but the complexity of the world can often hide the true agent of harm.

But to me, the more relatable fear that can be exaggerated from this is the fear of well…How to say this in a way that is not silly? The fear of social mores. The fear of unseen rules of conduct violated. The fear that, without meaning to, you have made a powerful enemy or offended someone. It’s a fear of the unknown, I suppose, but more concrete than that. It’s not that you don’t know, it’s that not knowing will invariably lead to you coming to harm.

In this mold, than, our main character should have offended these forces in a way that is hidden in the narrative. No special attention can be given to it, or the offense and the anxiety of the unknown is too great. It would serve even better to hide the small offense that drew the invisible down by having the main character do some great insult to another power. The paranoia that could fester at chasing the wrong issue as the source of misery would be a good source of tension and gives the story some structure. We begin with the offense, then move to the consequences, then seeking remedy in the wrong source, more consequences, and the final revelation of the true source of the suffering.

5 thoughts on “The Little People In Life”