This Week’s Prompt: 83. Quotation “. . . a defunct nightmare, which had perished in the midst of its wickedness, and left its flabby corpse on the breast of the tormented one, to be gotten rid of as it might.”—Hawthorne

The Resulting story: The Magi and King Morgan Pt 2

This weeks quote is from the novel, the House of Seven Gables. The novel follows a number of themes—contrasting old, aristocratic and isolated living with more fashionable and mercantile living. The dangers of superstition, particularly of witch hunts. The futility of the past, the nature of architecture as a haunting, family feuds both within and without, fears of mesmerism, corruption of government authorities. It is a Gothic book in all but name. So, what are we to start with today, with such a wide text?

I am loath to continue with the nightmares and witches. While, yes, certainly there are creatures that I haven’t touched upon regarding dreams and nightmares—Lilith and the lilitu, for instance, or the use of dreams to take on animal forms and combat evil—I suspect those particular topics will be reached anyway. No, I’d rather focus on a different portion of the book and of Gothic literature obsession. The gaze.

In House of Seven Gables, we are introduced to two families. The Pyncheon’s and the Maule’s, a rich and poor family. The Maule’s land is robbed, by means of a witchcraft accusation. This accusation, which carries down the generations, lays at the feet of the Maule’s many supernatural capacities, not the least of which is the evil eye, which we will get to shortly. However, Hawthorne connects the power of the eye to the then modern practice of mesmerism, a science dealing in animal magnetism and hypnosis. The gaze to Hawthorne has the potential to harm—it isn’t merely a passive action, but rather a potentially malicous one.

This notion of the importance of sight can be found in a number of other foundation Gothic texts. We can consider Vathek, a story that focuses on a wicked Caliph. Among the Caliph’s powers is his gazed which—when enraged—can kill a man with hatred. The Caliph’s story, including as it does demons, magical swords, and a quest to hell, is worth a read for a fan of the Gothic. We can also consider importance of vision in Frankenstien—here the eyes of the monster are what gives away it’s character to the more mortal participants and are the source of horror. Dracula like wise has a commanding stare, as do most vampires in Gothic tales—the Count of Monte Cristo is noted for his eyes, and Dorian Grey’s painting suffers when veiwed at all. The power to see and be seen are dangerous in these stories, to the last. Even the other Great American Horror Author, Edgar Allen Poe, included a fear of vision—the tell tale heart after all stars a most terrible, vulture like eye.

Where does all this fear of vision come from? Well, it is not without precedent. One of the most fearsome folklore ailments is the evil eye. Under various names, the evil eye stretches from Scotland across Europe and into parts of South Africa and Middle East. The evil eye’s effects are almost universal: a person with the evil eye can afflict another with a curse—either misfortune or ill health—with nothing more than a stare and evil intent. Particularly fearsome examples refer to mummifying their targets Often the effect is most feared among children, and so numerous precautions are taken to avoid it.

In Macedonia, clothes were worn inside out to avoid the evil eye. In Palestine, blue glass was used to ward it off. Various charms are described by Etruscan witches to keep it at bay. In Greece, at various times, blue beads and blue string have been used to ward it off from animals and other human beings a like. In Persia, rugs were sometimes woven with complex designs to avoid the evil eye, and for this purpose one author speculated Celtic notes were made to confuse the witches eye.

Who is liable to use the evil eye varies from location to location. In Ethiopia, it was often ironworking artisans who made use of it—particularly against clients who failed to pay or who were more successful then they were. Among the Suk people, one possessor of the evil eye was a rather rich rancher—however, do to his capabilities, he was avoided at all costs.

The evil eye’s spread in the states, and in New England in particular, is documented with the case of one John Godfrey. John Godfrey, as a renowned witch, was accused during one of his law suits of speaking freely of witchcraft in order to shock victims. He would say that the witches merely reported to the devil who had displeased them, and then stare at whatever they wanted dead—cattle, man, child, what have you. 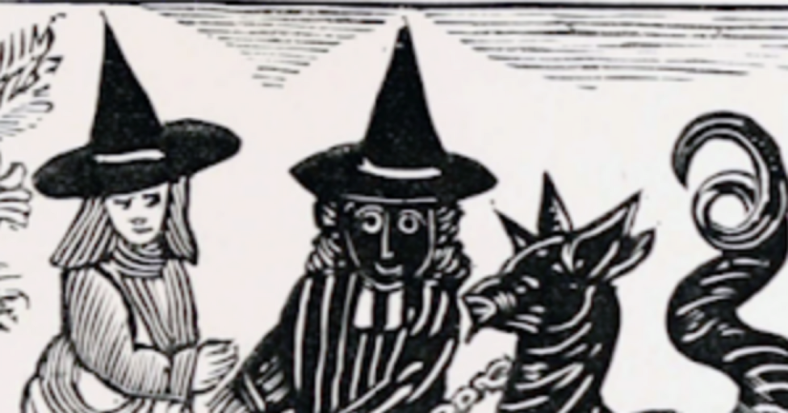 That a New Englander would bring such beliefs is not surprising. In every part of England, the evil eye can be found. We have talked before, at length, of the power witches in Shropeshire had. There we have witches who nearly waste away a yougn woman by “overlooking” them, cases of a horse being used to dectet the witch in the case of Kitty Williams, and our man who fixes his enemies in place with a glance. In Lanchshire, there were stories of the evil eye again used on cattle—but frequently tied to other interactions. Outsiders couldn’t use the evil eye if they were avoided, and excessive admiration was thought to also bring on the evil eye through envy.

But the evil eye is not the deadliest or oldest concern with gaze. We can find a more fearsome sort in Ireland, for example. There the evil eye was known as Balor’s eye for sometime—and perhaps was it’s lesser cousin. Balor was a great lord of giants who inhabited Ireland, and had an eye so vast that it took seven men to lift it’s lid (or it possessed seven lids, and each took a great effort to raise). It was said when Balor gazed upon a field it withered, men died, and stone suffered. It is said sometimes that when Balor was slain—and he was of course in time slain—that his eye burned a lake into the ground where it rests to this day.

The other famed European example is the Basilisk or Cockatrice, a pair of related creatures that appear to be either a snake or a rooster. The gaze of these creatures was said to be murderous and paralytic, naturally leading them inhabit vast deserts in Northern Africa. 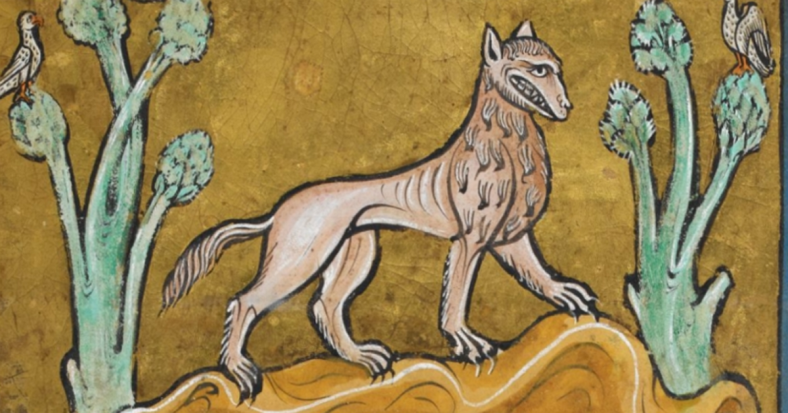 They shared this prowess with a less well known, but equally frightening creature: the Crocotta. This creature was accounted for living in Ethiopia or India, and was believed to have a number of qualities. When it’s shadow touches a dog, the dog is struck dumb. When it gazed on a person or animal three times, it froze them in place. It was also capable of imitating the voices of victims, and was invulenerable to steal weapons. Later additions in Medieval bestiaries added gem-eyes that, if held under someones tongue, could provide visions of the future.

Moving to the Americas, we find a number of comparable creatures. Here we enter a difficult space—I did contact a modern member of the Cherokee to confirm these stories, but my abillity to find linkable sources was hamstrung. The one I’ll focus on is the Uktena, a horned serpent—the description I found said it was as wide as a trunk, with deer antlers, and a fire jewel in it’s eye. This jewel has a number of traits: it is magical, oracular, and if a hunter looks at this jewel, they are blinded and run into the serpents mouth. Other traits include that the Uktena can only be slain by firing an arrow at it’s seventh stripe—beneath which sits its heart and life. And impressive for our discussions, looking at the Uktena will kill not the hunter, but his entire family. Combined with the creatures poisonous breath, and the Uktena is a terrifying creature to find in the woods. Nonetheless, there are stories of a man managing to slay one, and making off with the jewel.

From the Cherokee to the Lakota, we have a very distinct water creature with deadly vision. The Unk Cekula is one of a pair with Unk Tehi. The two creatures came from the north, and proved hazardous—if they reproduced, they would endanger the entire world (an origin that resembles some stories of Leviathan). So one was slain. The creatures properties are notable: She has eyes of fire, skin of stone, and claws of iron—this last trait a post-colonial addition I think—and to look upon her was death. First a victim would go blind, then mad, and finally die. Like Uktena, her weakness relates to the number seven (the seventh spot instead of stripe) and she has a magical crystal within her. A pair of brothers slew her, one blind, with the help of a medicine arrow.

Bear Butte, which was created after a fight between Unk Cekula and a great bear.

The Hero Twins of the Dine leave a number of dead monsters behind them, but one that is worth our attention is Binaye Ahani, who slays people with their eyes. These monsters dwell in a cavern shaped like a house, with a great family. When the Monster Slayer arrives, they attempt to kill him with their gaze—the text refering to it as “lighting” shooting from their eyes. The Monster Slayer’s armor, however, protects him. Perhaps it uses the same techniques as mirror armor. Their eyes eventually stretch out with effort, and burn on their own fire. All but two are killed, and the spared youngest become birds of fortune and beauty.

We could go on—the dangers of sight on statues and icons were discussed before, and the dangers of seeing a god’s true form in some mythologies are known. But I’d like to step out of folklore and ask what it is exactly that people fear. Why is staring or being seen dangerous? Why is it assumed envy should have power here?

I think a sincere part of this is that a gaze, a glance, is a connection. To make eye contact with someone or something is to connect with them, to reach out in an unspoken way and show understanding—and that this understanding isn’t always wanted, mutual, or equal. To see something is to interact with it, and by interacting with it, be changed by it. That change can be dangerous, lethal even! Especially with wicked intent.

Our follow up story will incorporate some of this of course—we can easily weave the work of dreams and gaze together, slumber with the trance of mesmerism. The creation of illusions by the wizard and the power of a gaze by his heir seem appropriate to bring together.