This Week’s Prompt:73. Rats multiply and exterminate first a single city and then all mankind. Increased size and intelligence.

The Prior Research: The Rats Are Closing In

I’ve never liked the city at night. I blame television—the crime shows are always in cities, and the crimes are almost always at night. So when you walk in those precious bits of not absolutely brightly lit street, your hair stands on end. Is that a leaf billowing in the wind or foot step. Is someone following you or just walking the same way? What about the shapes in front of you, that you can’t quite make out? Are they people, or is it just a shadow from a passing car? Was that little bit of motion a cat on the prowl?

Of course it was. Of course it almost always is. My heart stays in my chest these days, along well worn paths. Sure, every now and then I eye someone with undue suspicion. But that’s all it ever is. And sure, I make a point of walking places where there’s more bright lights when I can—it helps to be safe, and i’ve never had that particular strain of paranoia that thinks everyone on a street might be scheming against me. Not frequently. The odd squeak or sound of a horn was easy enough to ignore.

Squeak? Hm. That was new. I fumbled with the keys at the front door, trying to brush it off. Rats were uncommon along 53rd, but they weren’t impossible. And it probably was a bicycle tire or something similar.

But then I heard another. And another. I turned my head as the lock finally clicked open. There, lurking beneath a bush, were eight eyes that seemed to faintly glow, packed ontop of each other. Staring at me.

I went inside quickly, making sure the door closed behind me. Flying up the flights of stairs, panting at the top. I barely noticed the small shreds of a spider web in the corner—I’d get rid of that later with a broom. Spider season was coming late it seemed. 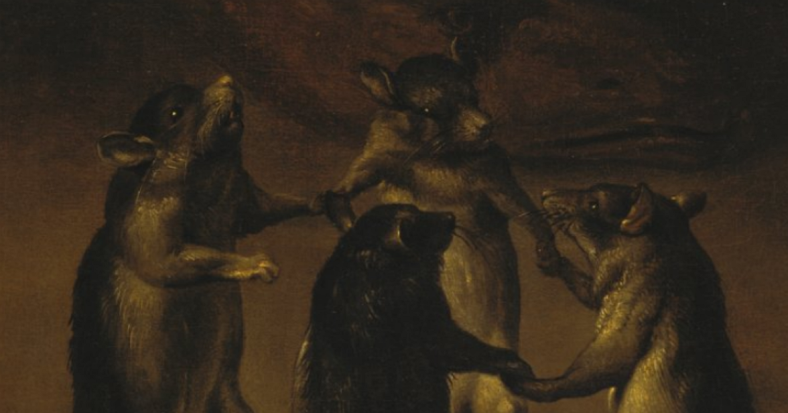 I woke up when my room mate slammed my window shut, my air conditioning crashing down three stories onto the back alleyway.

“What the hell?” I said, jumping up from my bed as I saw Rob hammering nails into the window sill. He held up his hand to shush.

“Your hammer away and telling me to sush what’s gotten–” I started before he put his hand on my mouth.

“Shush means shush.” Rob said, glancing at the window. “We…we have a bit of a problem right now.”

I batted aside his hand and looked out the window. And I nearly vomitted. Down in the alley, I saw the broken remains of my AC—and a pool of blood coming from it, hundreds of small eyes staring up in a mass of fur and tails.

“Jesus Rob, what the hell are they–”

“I have no idea.” Rob said, walking out of the room. “I’ve nailed up most of the windows—a couple got in the kitchen door, but–”
I followed, still in light pajamas, and saw the remains of a few rats on the floor, little blood stains and broken skulls.

“–There seem to be more. News says there’s a surge of them across town. Gotta imagine that there’s no pest control reaching us for a bit.”

The kitchen door was sealed with duct tap layers, and rubber cement. We’d lose the security deposit for sure with stuff like this. I mean the cleaning bill will cost a fortune, and a rat infestation—well, I mean it was the whole city so…my train of thought stopped when I looked out again. There was a dozen rats on the tree branch, crouched and baring their teeth. A number of small dents on the window indicated a few had jumped across already, trying to get in. One of the rats was nibbling on some shoelace.

“Wait, they’ve shut down the whole city? Why not just run cars over them or something?” I asked, gesturing outside. “Or the trains?”

“Did they scatter from the AC?” Rob asked, not looking up as checked the kitchen windows.

“Then I don’t think their going to scatter from cars. Who knows, maybe they would, but do you want to take that risk? You run over a few—who knows how many, and then what? You park, and get jumped by hundreds of them on the sidewalk.” Rob said, shrugging. “Don’t know if they can stack high enough to get up the walls, but they can bite ankles pretty badly.”

“At least we’ve got food.” I said, popping over the fridge and trying to keep the impending freak out down. “I mean…we’ve got some.”

A carton of eggs, some brocolli and onions, some carrots. Three pounds of ground chicken, because Rob refused to buy quality meat. And rice and pasta in the cupboards. More than enough food to last us a week…okay, five days. But still. That was a good amount. The rats wouldn’t last that long.

The lights flickered in the kitchen.

“Shit.” Rob muttered, and ran out to the stairs. “Hey, Ashley, your lights acting up?”

“Y-yeah.” Ashley’s voice came up from the second floor. “AC’s down too.”

“Alright, I’ll test the pipes.” Rob said. “Tim, you check the place across the hall—don’t worry, I already nailed it shut. If the lights there work, then half the place has power. If not, the rats got the main line.”

I nodded, and ran over to the empty apartment across the hall—the door was unlocked, in case Mike found a buyer who wanted to see it that day. It was almost identical to ours—three bedrooms, a bathroom, a kitchen. But utterly barren, not even scarps on the wood floors.

It didn’t get any brighter flicking the switch back and forth. I went into the kitchen, and tried the same. Nothing. As I went to check the fridge there was a thud. Looking up, I saw a pair of paws gripping to the windowsill. The rat puffed itself up as it emerged, hissing. I slowly backed out of the room, not breaking eye contact, as another rat thudded on the window. And another.

They were hissing and clawing at the window as I scampered out.

“Lights down. And a couple got on the window.” I said as I heard the faucet turn off and a few stray drops fall. “Hows the plumbing?”

“Well, we got water.” Rob said. Rounding the corner I saw the rust brown stain on the steel of the sink. “But don’t drink it. I don’t know if they’re rubbing in the water, or if the actually messed up the pipes.”

“No power, almost no food, no water…” I said slowly, as Rob turned at another thump at our window. “We’re fucked, aren’t we.”

“Not yet.” Rob said, thinking. “Down stairs I’m sure someone has water bottles. I mean, these rats are smart, sure, but it’s not like we’re in any trouble as long as we can–”

There was another ding on the window. Not the dull thud of a rat’s skull smacking on the glass, but rather a small tick of a stone striking glass. And then another. We both stared at the rats on the tree, sitting up on their hindquarters—tossing stones at us from the tree.

This story is a bit rushed, and a bit silly. I went with an isolated and human level case, and wrote it with B-Movie notions in mind. If I had the time, I would have probably watched the classic movie The Birds for some inspiration regarding a massive of animals taking over and menacing a small town. As it stands, this story got interrupted by my own moving plans and a general problem of energy this week.

Next week, a story of revenge!

One thought on “Squeaks in the Night”